We joined a march of tens of thousands of people of all backgrounds saying No! to the rise in racism and Islamaphobia. Labour MP David Lammy was among the passionate speakers demanding a change of course from Theresa May and the British government – “What was the hard right has moved into political parties. We now have these people sitting in the Cabinet… And I have to say “I’m watching you” to my own party, deploying this anti-immigrant rhetoric.” 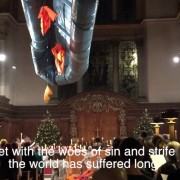 A Life in the Borderlands